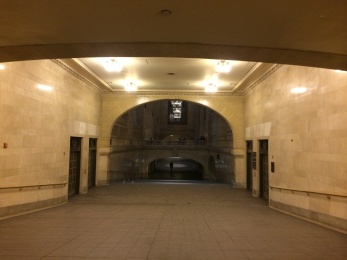 I just got back from New York. It was below freezing, and I didn’t even ask what the wind chill factor was or I wouldn’t have left the hotel. Piercing, biting, sharp, cutting, none of those adjectives fit the wind whipping around the city that day.

I stepped out of one building and my Desigual bag and I almost took off down the street. Even the fashion police weren’t out. If they had been they’d have been very busy. I had my UGLY hat, polar mittens, heavy boots, leg warmers, sweaters, scarf, and heaviest coat and I was still cold. Every one was looking rather out of fashion in their warmest attire.

There is an upside to this weather, though. The Elmos, Minnie’s, and other assorted characters were nowhere to be seen. I did catch a glimpse of one Elmo sheltering in the doorway on his cellphone. I can only imagine that conversation!

So, it was soooo cold the Thai restaurant next to my hotel (Le Parker Meridien) had their pipes freeze up. On Presidents Day, my checkout day, I couldn’t get the elevator to go to Starbucks. I waited 10 minutes, gave up, went back to the room to get my things. Normally I’d take the stairs. However, the 21st floor is quite a trek down, even for Starbucks. I have to say other than that, the hotel and room were fantastic.

The elevator finally came; equipped with a staff member of the hotel. He had a walkie talkie and gestured frantically and spoke quite loud. “Don’t push the 1st floor button!” Well, the water had flooded their elevator shaft and was up to the 1st floor. So, I rode to the 3rd floor, and took the suite elevator to the lobby.

Luckily, a cab was out front. (After my short trip to Starbucks.) No line at Starbucks, cab right away, things were going pretty good now…..

I got to Grand Central which is always packed and brightly lit. It was only lit by the glass in the ceiling and low lighting from the generators. I saw a LOT of military police, state police, and regular police. I was a bit concerned but headed to my train. On the way, there was yellow tape blocking off an empty corridor sloping to the shops and restaurants. It was very disconcerting.

Trains were still running!! I got on mine and found out through Google and a few social media sites that the power had gone off for about 3 or 4 minutes. I can’t imagine being in Grand Central in the dark. The picture of the empty concourse is eerie enough.

All in all, I LOVE NEW YORK, freezing, sweltering, or just right. It’s my favorite city on the East Coast, and always will be.

Photos Around The World

PAGES ON MY BLOG